What is the cranial cruciate ligament? 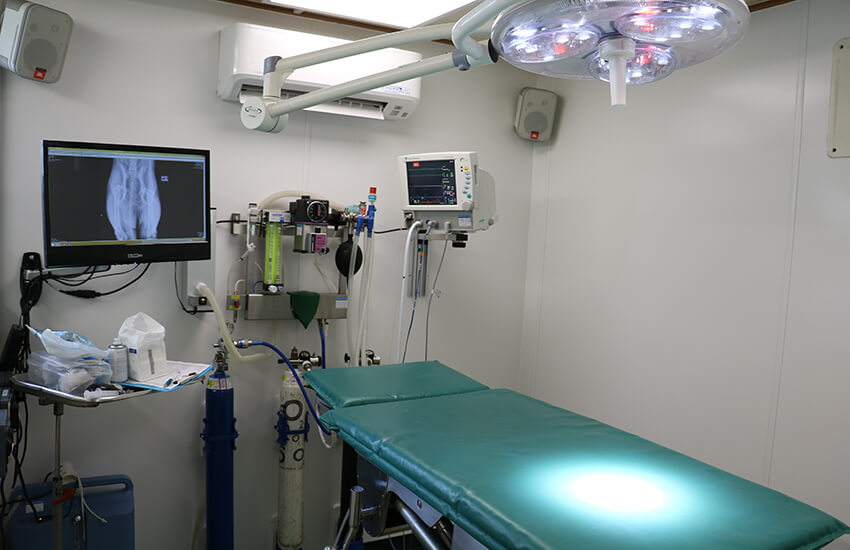 The cranial cruciate ligament (CrCL) in dogs is a band of tough fibrous tissue running from the front of the top of the tibia (shin bone) to the back of the end of the femur (thigh bone).

It prevents the tibia from shifting forward relative to the femur during weight bearing and twisting movements. It also helps to prevent the stifle (knee) joint from over-extending or rotating.

This ligament can rupture as a result of long-term degeneration, whereby the fibres within the ligament weaken over time, like a fraying rope. This can be a complete or partial tear.We do not know the precise cause of this, but genetic factors are probably involved, with certain breeds being predisposed (including Labradors, Rottweilers, Boxers, West Highland White Terriers and Newfoundlands). Once stretched or ruptured (torn) the stifle becomes painful and unstable.  In some cases the ligament rupture can be caused by traumatic event. Cruciate ligament tears, either complete or partial, are unlikely to heal and may cause ongoing lameness. Since most cases include an already diseased ligament both knees can be simultaneously affected in some cases.

What are the symptoms?

Hindlimb lameness is the most common sign of a CrCL injury. Stifle swelling, pain and instability of the joint can also be found. Some owners may notice that dogs will sit with the affected leg held out to the side and thigh muscle atrophy (weakness) may occur.

What happens when the cranial cruciate ligament is damaged?

The knee joint (or stifle joint) consists of the thigh bone (femur), the shin bone (tibia) and the knee cap (patella). When the dog is standing and walking, the weight bearing axes passes through the shaft of the tibia, the contact section (which is called tibial plateau) and the shaft of the femur. The main muscle responsible for keeping the knee extended when weight bearing is the quadriceps, a muscle which sits in front of the thigh and attaches to the top of the tibia through a powerful tendon, called the patellar tendon (which includes the patella). When the quadriceps contracts, it straightens the leg. Because the angle between the patellar tendon and the tibial plateau in dogs is more than 90 degrees there is a forward motion of the tibia every time the dog weight bears (tibial thrust), an increased steepness of the tibial plateau increases this motion and is known as a risk factor for developing CrCL problems.

In some dogs this mechanical deficiency, as the femur will roll down the slope every time weight is applied on the leg, can result in trauma to other structures within the joint in particular the menisci (a pair of buffer cartilages). When slipping down the slope of the top of the tibia, the femur can crush and tear these cartilages, particularly the one on the inside (medial aspect) of the joint.

How is a cranial cruciate ligament injury diagnosed?

Diagnosis in dogs with rupture of the CrCL is usually based on clincal examination, with demonstration of instability of the joint by specific manipulations of the knee. However this may not be detected in all cases and the clinical signs along with examination of the dog under sedation of general anaesthetic may be required.

Fraying of the ligament triggers a cascade of events resulting in knee pain and lameness. At the earliest stage, osteoarthritis is already present to some extent. The main test we can use to diagnose CrCL rupture is called the cranial drawer test which involves sliding the tibia forwards in relation to the femur; this is the movement that the ligament should prevent. Cranial drawer instability is better assessed with sedated patients, normally at the time of radiographs, because they are more relaxed. There is a gentler version of this called a tibial compression test which can be done when the dog is awake; if positive it would point to a CrCL injury but a negative result does not exclude an injury.

The body naturally tries to reduce instability of the joint by making the tissues around it to become thicker and fibrosed, especially on the inner side of the knee, this forms a characteristic bulge: called medial buttress and it highly correlates with cruciate injuries.

In face of a clinical suspicion radiographs are taken to demonstrate joint effusion, assess subluxation of the shin bone and radiographic changes that indicate osteoarthritis. They are also used as template for the surgery and must be taken in a standardised position.

CrCL injury can be managed surgically or non-surgically.

Non-surgical management is seldom recommended, except where the risks of a general anaesthetic or surgery are considered excessive (e.g. patients with severe heart disease, uncontrolled hormonal disorders or immune mediated conditions, etc.), or in the case where a large progress has been documented with rest and pain relief alone.  The main aspects of non-surgical treatment are body weight management, physiotherapy, exercise modification and medication (anti-inflammatory painkillers).

In the cases where an imporvement has not been achieved by conservative management surgery is required. Surgical treatments are categorised into techniques, that aim to either replace the deficient ligament or those that render the ligament redundant by re-aligning the forces acting on the stifle joint (neutralisation surgeries).

Various surgical techniques that mimic the procedures used for ligament replacement have been practiced. Sutures of nylon with various knotting and crimping systems are placed around the structure at the back of the femur (the fabella) and a tunnel at the top and front of the tibia. These so-called lateral sutures have variable reported success rates dependent on material and technique. The primary disadvantages of these techniques are their unpredictability during the early stages of recovery and mechanical limitations in heavy and athletic dogs. 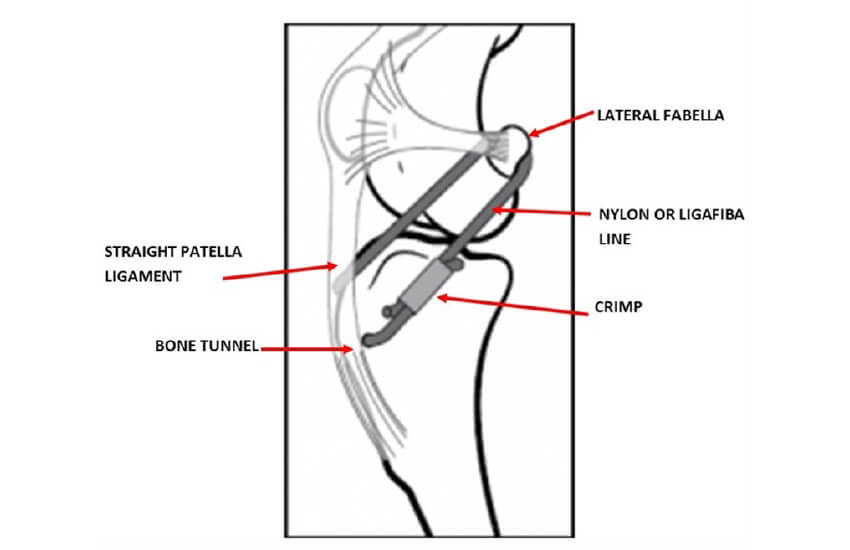 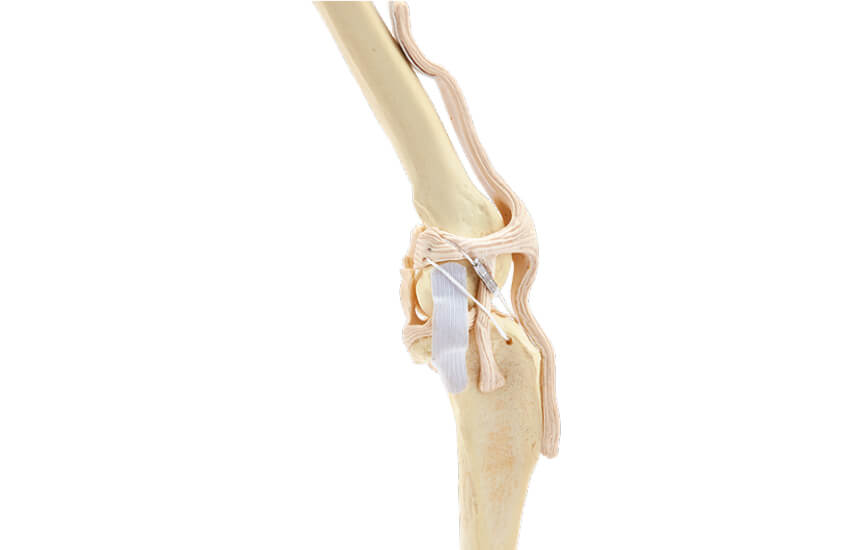 Neutralisation surgeries alter the geometry of the affected knee joint in such a way that the CrCL is no longer necessary to maintain stability.

There are two variations of these: TPLO (Tibial Plateau Levelling Osteotomy) and TTA (Tibial Tuberosity Advancement). They work on a similar basis and from an owner perspective they are the same. The decision between the two is made on templated radiographs and it is based on the individual shape of the knee and the tibial plateau angle.

When the quadriceps muscle contracts, the patellar tendon pulls and if we consider the resultant forces, most of the pull is up but some of it is forward. This generates the so called cranial tibial trust.

Neutralisation surgery mechanically alters the shape of the joint, making the tendon perpendicular to the tibial plateau (reducing the angle to 90 degrees). When the quadriceps contracts, the pull isvertical with no forward pull; so tibial thrust is not generated and there is no strain on the cruciate.

In the TPLO the tibial plateau is dropped to meet the tendon perpendicularly. This involves cutting across the shin bone, either by taking a wedge out or making a circular cut, rocking the plateau and fixing the two segments with a bone plate and screws. As shown below.

In the TTA instead of altering the tibial plateau anle, the front of the tibia where the patellar tendon inserts is pushed forward to meet the plateau. This involves cutting the front of the tibia along the long axis to push it forwards and securing it in this position with a titanium cage and a plate with screws. As shown below. 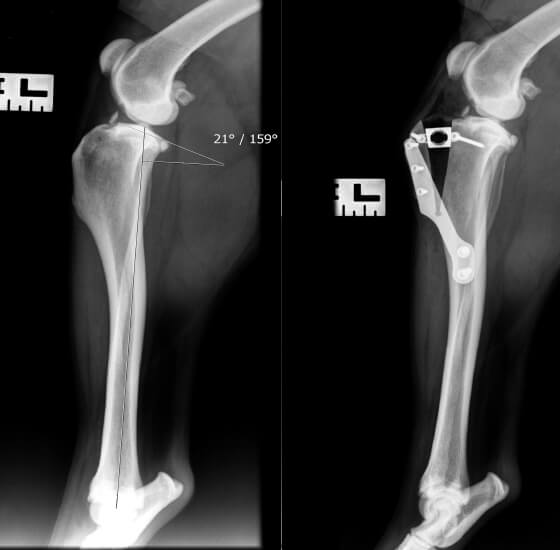 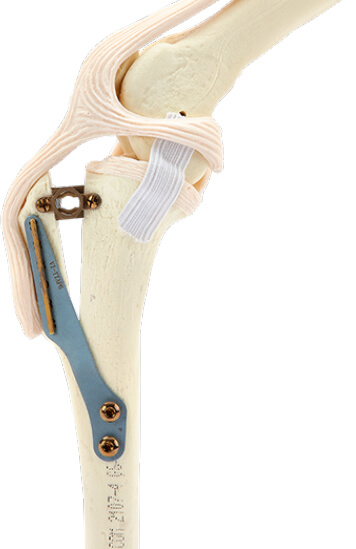 What are the potential complications?

Infection is treated using antibiotics. In some cases where bacteria adhere to the implants, the implants must be removed after the bones have healed. In the vast majority of animals, the implants remain in place for life and cause no problems at all.

Mechanical complications usually occur in dogs that exercise too much before the bones have healed (which takes about 8-12 weeks). Some mechanical complications are managed with rest alone, although some problems require surgical revision. Late injury to the menisci can occur in cases where the menisci were intact initially at the time of the first surgery. These can require surgical treatment. Other rare complications including sprains and strains around the knee joint can generally be managed conservatively.

What care is required after the surgery?

The patient is normally discharged on the same day of surgery, although sometimes a longer hospitalisation period may be required in order to allow full recovery from the anaesthetic and for drug administration (especially pain killers).

The wound is on the inner side of the knee and it is covered by a wound dressing; sutures are all buried under the skin. Gently applying an ice pack is allowed for the first 48h, if the dog tolerates it. Medication is dispensed at the time of discharge and normally includes an anti-inflammatory and an adjunctive pain killer.

We normally recommend a post operative check at your local vets 5 days after the surgery.

Post surgery the dog must be strictly rested for the first week and go out only for toileting purposes. Once the dog has been checked he/she may be able to start very short and gentle lead walks and this should continue for the next 7-8 weeks.

Trotting, running, jumping and playing with other dogs must be avoided, as well as slippery surfaces and stairs. Sometimes cage or room confinement is recommended when unsupervised for the full recovery period.

If the dog bothers with the wound and wants to lick it, we recommend keeping a buster collar on until the wound is healed (normally around 10-14 days after surgery).

We advise taking follow up radiographs at 8-9 weeks post operatively, to assess bone healing; this can be done either with your local vet or with ourselves. Once bone healing has been confirmed, lead walking can be gradually increased over a period of 4 weeks when the dog can return to normal unrestricted exercise.

If you have any concerns, please do not hesitate to give us or your vet a call.